I received an order from QRF with some 15mm odds and ends primarily for the British and Soviets in 1958.

First, the cool stuff; for the Brits, a platoon of Conqueror heavy tanks, and for the Soviets, a couple platoons of T10s. 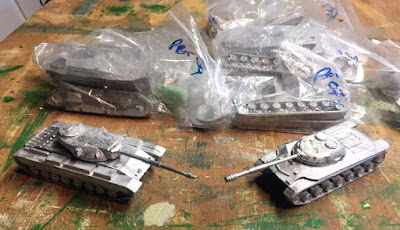 There is also, a platoon of Soviet BRDM1 scout cars and a couple of Bedford RL trucks for the British. 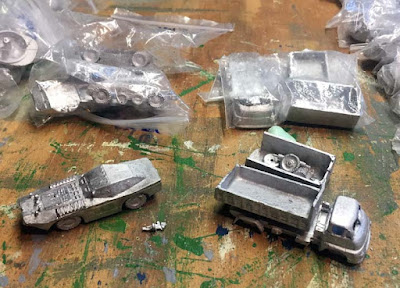 My first 15mm 1958 games will likely center around a small group of British infantry that were overrun in my 6mm WWIII battles back in February.  My current thinking is to run a sort of mini-campaign of scenarios as they try to make their way back to friendly forces in the the early days of WWIII, 1958.  More on that later.

I originally intended to place an order for a bunch of French VABs back in March, right around the time that QRF had stopped taking orders.  So when they added their post war lines back to the catolog,  I added a few a few more things and placed my order.  The ordering process went smoothly with shipping time being a touch over three weeks.

I ordered ten of the VABs to fill out a French infantry company (adding them to what I already had).  Here's a pic of one of them right out of the bag. 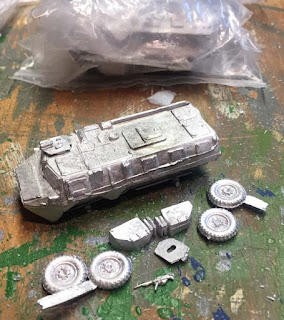 The VBLs may end up on the shelf for a while, but I hope to have the other stuff done by the end of November.  I 'm not gaming yet, but it can't hurt to add to the lead (/resin/plastic) mountain.

Posted by irishserb at 5:17 PM