The Lt figured that they could make about 8 miles per day, and figured that they had 1-2 additional days before HQ would conduct a search outside the bunker.  With any luck they would be 40 miles or more south, before anyone came looking.

As it turned out, the team had put 60 miles between them and the bunker, before the extraction team headed off in the wrong direction to look for the Lt's team.  The team had left some confusing remnants behind before heading south, just to make the puzzle more fun for the extraction jokers.

The team had about  two week's worth of supplies, and had already begun supplementing them by foraging off of the land.  Additionally, they had old maps and had done additional research about survival in the Before, prior to going on the mission.

The team had now traveled eight days without incident, knowing that sooner or later, some excitement would find them.  In the mean time, they just took in all that they could and marveled at how much they had missed, living in the complex. 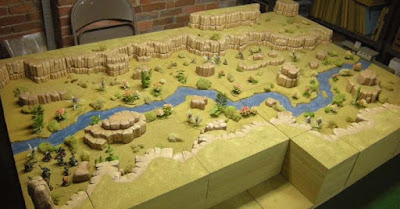 A view of the countryside. 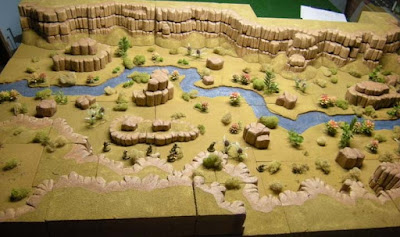 And from the other side of the table, the team can just be made out, strung out
along the lower center of the photo, South is to the right in this case.

As they followed a small stream south through a shallow canyon, they happened into a band of feral warriors.  The Lt speculated that they were either mutants or some sort of genetically engineered survivors, given their size and the oddness of their features.  They also covered themselves in green paint, which seemed to make little sense in a yellow and brown wasteland. 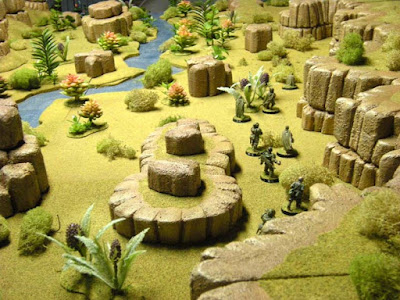 Spooky in the lead, spots something... 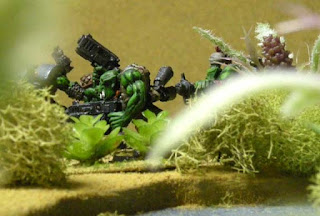 As near as they could tell, the team hadn't been detected, and after a brief talk, they simply decided to backtrack a ways, find a way out of the canyon, and just go around the green behemoths.

Shortly after they turned around, they ran into a second group of the green guys coming from the north.  This group could not be evaded, and upon being spotted, the green guys opened fire on them. 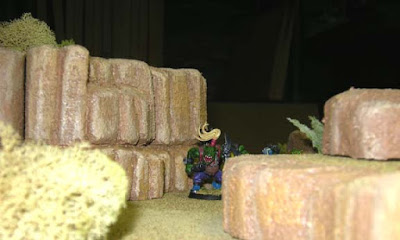 The scene was very chaotic, as neither side had been expecting a fight, and both forces were awkwardly strung out at the time of contact.  The green warriors were particularly savage in their manner, and reveled in battle.  They alternatively yelled, chanted and sang, during the fight, and seemed to almost enjoy the wounds that they received, rather than being impaired by them.

It rapidly became clear that these things were not human.  they didn't really bleed much from their wounds, and would only stop fighting after receiving massive traumatic torso or head wounds. Gunshots, and even loss of a limb, seemed to only irritate them at the most.

The battle progressed as follows:

Lt. Rogers saw Spooky just ahead, suddenly drop to a knee and begin shooting, but the target was out of the Lt's field a view.   A second later, a 7 foot tall green heap of angry leveled a gun at the Lt.  Rogers, Spooky, and someone behind him all fired simultaneously, at point blank range, hitting and dropping the green thing. 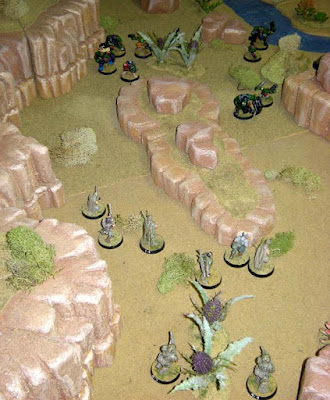 Instantly more green things appeared, from around both sides of a large rock.  To the Lt's right, Joe blasted one of them, probably the leader, with his plasma gun, turning it into a flaming inferno of rage, which continued its charge.  Spooky took a hit just in front of the LT, more shots hit the inferno to the right, and it fell down, struggling to crawl toward the team. 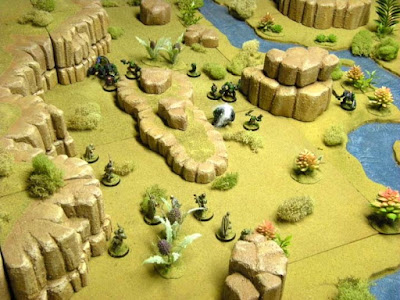 A small green thing took a hit and squealed, running back towards where it appeared from. Shots rang out from all around, and it was a miracle that the team wasn't shooting its own.

More of the big ones appeared, with two of them dropping instantly, one after receiving a head shot.  Rinkman took a hit from a monster shotgun, and went to the ground.    A couple more of the big guys advanced, taking hits.   The plasma gun took out one, and then Tinker took a hit, but got back up and returned fire.

At around this time, Rinkman, laying on the ground, bleeding and in agony, screamed out that their are more to the team's rear,  Chucker and the LT both turned and fired at the nearest target, both hitting it, and watching as it shrugged off two strings of holes in its body, and kept coming, firing wildly.

Someone, maybe Obradavich, dropped the last of the green guys to the north.  Spooky took another hit, but not bad.  Chucker, the Lt, and Joe all fired, most shots hitting at such close range. A green thing fell, another was up in flames, but sort of still coming.  Tinker tried to carry Rinkman away. 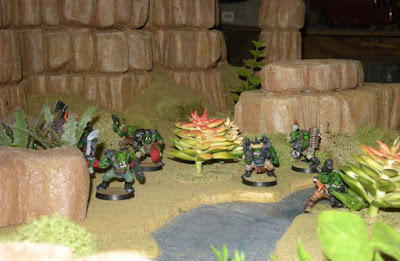 Shots were fired in a continuous frenzy, the plasma gun overheated, and Joe took a hit, two more green things dropped, then a huge green thing with a giant machinegun came out of the stream and fired a burst at Obradovich, almost cutting him in two, and killing him instantly. 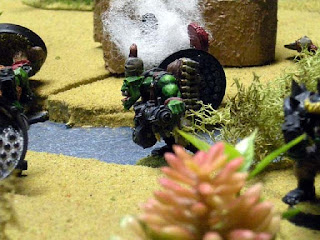 Joe got the Plasma gun back to life, and it cooked the big dude with the MG, before he took apart the rest of the team. A volley of shots hit the Lt, Chucker and Cummings, and it started to look really bad.  Everyone in the team had at least a minor wound.

The Lt ended another green thing, while Joe took another hit and fell; Chucker  immediately picked up Joe and tossed a grenade with a couple more greenies falling.

The last few green things advanced, as the Lt took another hit and went down.  Tinker showed back up seconds later, having handed Rinkman off to Spooky, and pulled the Lt out of the fray.  Cummings, already hit, covered the retreat, firing like a madman.  The last two green things closed on Cummings, who took another hit,  when Spooky fired from on top of the canyon wall, killing one of the green things with a head shot.  But Cummings missed the other shot, and was hit fatally, before Spooky could fire again. 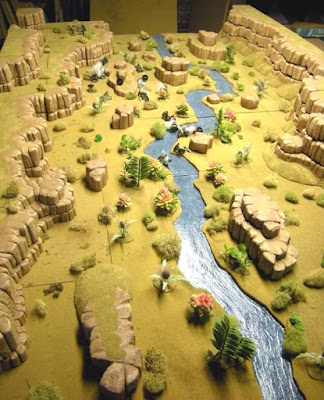 In an instant the shooting stopped, Sgt Cummins was dead.  And Spooky was overcome with anguish.  A half second quicker and Cummings would still be alive. Tinker and Chucker sat with their wounded comrades for a moment, tending the wounds as best they could, and let Spooky regroup.  The shooting had ended, but ore green things could show up.

The team had lost two of their number, and had three members wounded badly enough, that they needed help to move.  The team found a secluded spot amongst the cliffs, and tinker went to work, a little more seriously now, on everybody's wounds. 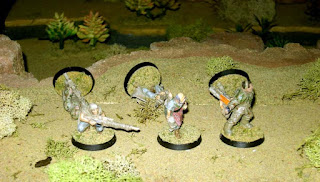 They would all live, at least for awhile, but the team was suddenly a lot less mobile.  They would need a couple of days rest, before pushing on.

Posted by irishserb at 7:09 AM