(Note:  This is a continuation of the air battle described in AAR25, which I recently discovered has disappeared from my blog, apparently due to some sort of error on blogger .  I haven't been able to find my notes on the battle over these last few days, but will reconstitute the AAR, when I do.  From  memory, I believe the results were that Uwanda won control over objective B5 by shooting down two Mugabian Mig 15s with a pair of F5s).
_____

As the battle of Objective B5 took place on the ground, Uwanda's F5s continued to patrol the skies over the battlefield, while ground attack aircraft assisted the Uwandan advance.  Due to Mugabia's significant air combat losses, some time passed before Mugabia could get additional air assets to the area.

Though the issue on the ground at B5 was never in much dispute, Mugabia's presence in the air might at least reduce the threat to the withdrawing Mugabian ground forces.  To accomplish this, two Mig21s and a single Mig17 engaged the six F5s (four A models and two E models) that were protecting the airspace over the battlefield.

The Mig21s were coming in relatively high and fast, and the F5Es were directed to them quickly.  The Mig 17 was coming in on a different vector at mid altitude.  It was sited at 5 miles out, while it sited two of the F5s at four miles.

In addition to the six F5s closing with the enemy, two additional F5As, each still armed with a single missile and gun, continued to cover the battlefield, in case any additional Mugabian aircraft showed up.

This second air battle took place a little east and slightly north of Objective B5.  Mugabian air controllers tried to use the Mig17 to draw off as many F5s as possible, in hopes that the Mig21s would have some effect early on. 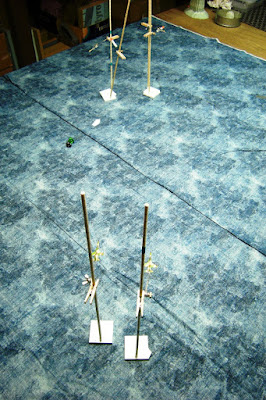 The F5s have just fired Sidewinders in the distance.
Surprisingly, both missiles hit their targets, with instant catastrophic explosions killing both pilots. 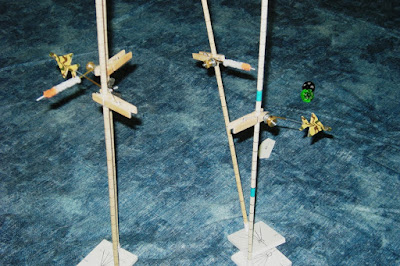 Both Migs are hit.

The Mig17, able to see the fireballs in the distance,  instantly turned away from the closing F5As, and dove to gain more speed.  The Battle for the air at Objective B5 was over with Uwanda destroying four Mugabian aircraft, and Mugabia destroying none.
_____

That was a short game, almost two turns on the table.  Given the relatively poor performance in previous battles, the sudden kills by the Sidewinders took me quite by surprise, and was something of a letdown in all honesty.  I expected at least a few minutes furball, with maybe one Mig shot down, and with any luck an F5 injured or destroyed.

Despite somewhat inconsistent performance, the AIM9L poses a distinct problem in the hands of Uwanda's air force, putting the Mig21 at a technological disadvantage to the F5, as well as now being significantly out-numbered.   Once all of the ground battles are resolved for this strategic turn, I will have to consult the political tables.  This could cause some interesting wrinkles in the game.

Sorry for the terrible photos, I'm hoping to fix some of the problems, before the next air battle (painting the bases to reduce contrast/brightness issues, and finally getting a real table cover for starters.)
Posted by irishserb at 5:42 AM