Even before my first experience with Star Fleet Battles, I wanted to play the game with miniatures.  Thirty-five years later, I've finally gotten serious about doing so, and one of the first questions to be answered was what color to paint the Enterprise and the Federation fleet.

My earliest memories of the original run of Star Trek are in various shades of gray.  It wasn't until the early 1970s, when we got a color television, that I discovered the colorful universe in which the Enterprise journeyed.

My impression of the enterprise was that it was a light bluish to greenish gray, not unlike the plastic used in one of the older model kits of the Enterprise. My older SFB Star Line Federation ships were cast in a light gray plastic that somehow seemed right to me also.  Maybe only from nostalgic memory of those early games. Then there was the white finish of Star Trek: The Motion Picture.

Perplexed, I started to research the issue.  I watched episodes of the series (both original and CGI enhanced), surprised at how dark the ship's skin appeared in some scenes and at how it morphed from grey to bluish to greenish to an off-white at times, all the time realizing that I had really come to think of Federation ships as being white or near white as depicted in the movies.

Eventually, I decided to go with the Enterprise's color in TOS, and arrived at this page in my search to identified the true color of the chameleon Enterprise.  Readily accepting the discussion presented in Mr. Newitt's article, I now had to match the Walmart Concrete color with something that I could wipe all over starship models without totally obliterating the fine detail on the plastic castings.

Originally, my hope was to spray the models with a base hull coat, do a little high-lighting with a brush, detail paint and apply decals. I figured that this would be fast and allow for a consistent finish.  After putting forth a significant search for a spray paint, I found some options from Dick Blick art supplies, but had some concern over the thickness of the paint, and my ability to apply it evenly to such small models.

So, I regrouped and decided to go with a brush paint that I could easily get, and matched the Vallejo online color chart to the sample provided by Mr. Newitt.  I ended up settling on Vallejo Model Color 971 Green-Grey as the basic hull color.  To be honest, I felt that it was a little light, and maybe not greenish enough, but I figured that being a touch too light would be fine on such small scale models.  And, I would just have to suck up the lack of greenish.

A side consideration was that I had decided to go with Vallejo 886Grey-Green as the base for my Romulans,  had painted a couple of ships this color already, and wanted the Federation ships to contrast the Romulans, so a little less dark and less green was okay.   Vallejo  971 Green Grey it would be for the Federation.

I assembled my recent acquisitions from Origins Gamefair, sprayed them with gray primer (should have used white, and found that I could in fact spray the little beasts with a pretty even coat), and began to apply my color choice with a brush.  Due to the transparency of the paint, and the gray primer, it required three coats to get pretty solid coverage.  Here are a few of pics of the models with the base hull color applied, detail painted using the restored Enterprise model at the Smithsonian, and a combination of Game Science (DNs and Tug)  and  Jupiter IV Decals (CAs). 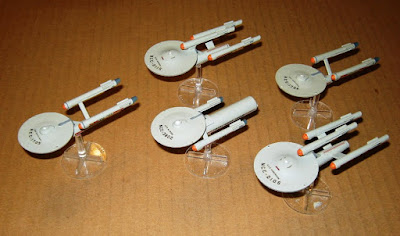 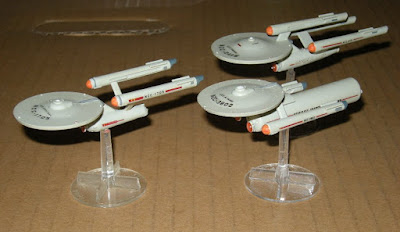 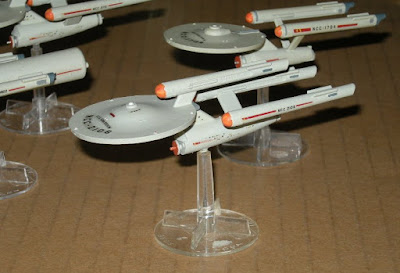 Note the difference in size between the Game Science decals on the Dreadnought
in the foreground, and the Jupiter IV decals on the Heavy Cruiser behind. 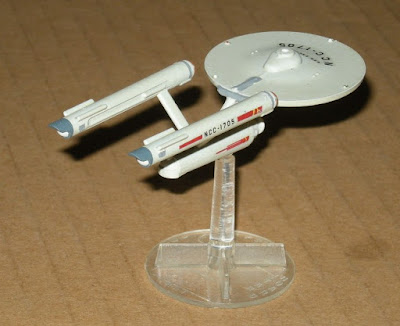 Ironically, the hull color appears very light and white here, but is darker and more
grey in person.  I'll have to take some more natural photos a little later,
unfortunately, I'm not set up to do that right now.

Despite the fact that they are not first class jobs by any stretch of the imagination, I am relatively happy with the effort.

Particularly when compared with my work from 1982 below. 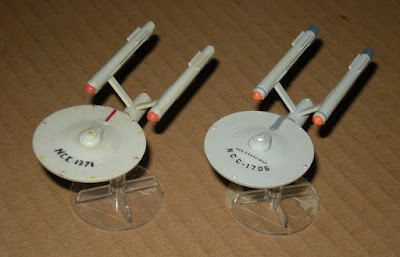 The old CA from 1982 to the left painted per the Starline 2200 instructions at the
time, and the new one to the right based on TOS.  Again, barely any difference
in the hull color in this photo, but they are in fact notably different.


The next group of Federation ships, frigates and an NCL from Amarillo Design Bureau are on the paint table now.


So that's how my 35 year quest to paint the Federation fleet stands at the moment. 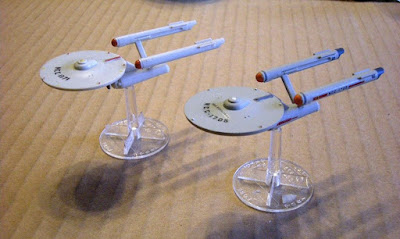 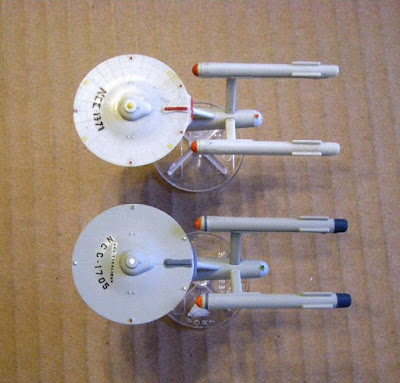 Once my case of flat spray arrives, I'll give them a blast to better hide those decal edges.

Posted by irishserb at 4:43 AM