I finally got to play out the eighth battle of my African imagi-nation campaign between the nations of Mugabia and Uwanda.  Here goes...

After the Uwandan raid on the ULF training camp in Mugabia,  the Mugabian leadership decided that a dramatic move needed to be made.  The resulting plan involved a three pronged attack to cut off and secure the Pettu tribal land in Uwanda.  The map below shows objectives A55, A58, and A60, where the attacks would take place.  Uwanda is located to the left of the solid black border, while Mugabia is on the right.  The first battle is for the town at Objective A55. 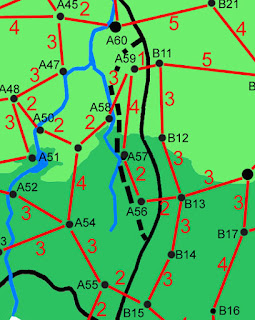 Mugabian Army Major Abasi surveyed his troops as they mounted up for the march on the Uwandan town, wondering what fate awaited them.  He wondered if the Cuban instructors had prepared he and his men for battle.  He wondered if he would have the support that he had been promised.  They would know soon enough, as in little more than an hour, they would arrive at their objective.  He nodded confidently at lieutenant Ng'ombe and got into his jeep.

The Mugabian force consisted of a motorized infantry company (110 troops), two SU-100 assault guns, and two towed ZU23 anti-aircraft guns.  Additionally, they would have the help of a couple of Gazelle helicopters and a battery of 152mm guns.  They would attack down the main east-west road after Uwandan forces were drawn out of position by a ULF attack from south of the town. 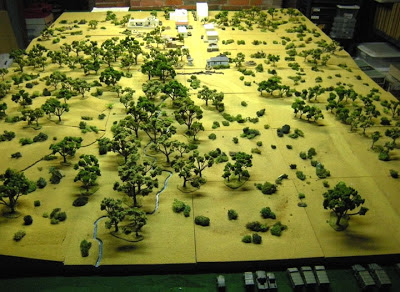 From the Mugabian perspective, a westerly view of objective A-55. 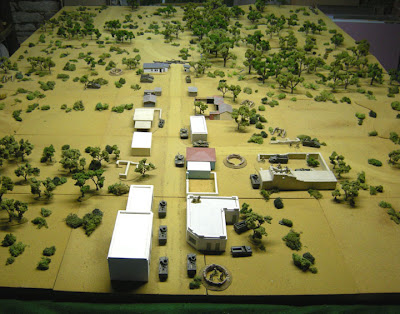 Uwanda's forces consisted of a Mechanised infantry company  (about 120 men), three Saladin armored cars, and a couple of Wombats in landrovers.  They could also depend on the spotting and support of a couple of Strikemasters flying overhead.

Uwandan forces had been warned of the movement to the east and were expecting the fight.  The ULF militiamen advanced through the woods to the southeast of the town in a mixture of jeeps and pickup trucks.

The ULF troops attacked in an uncoordinated mass of chaos that resulted in almost leisurely target practice for the Uwandan infantry.  Their advance stopped almost before it started with leaders getting hit first and losing 17 of 25 men in about a minute of fighting, while only inflicting a couple of casualties.

The attack did not draw Uwandan troops out of position, but did motivate the Uwandan commander to better deploy his forces.

The Uwandan roadblock at the east end of town.

Mugabian forces entered the battle from the east road, dismounting their trucks under the cover of trees east of town. 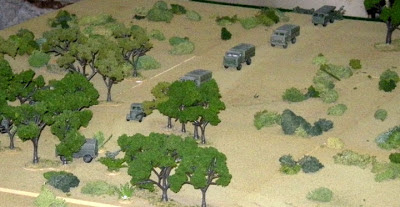 Quickly, the Mugabian troops dismounted and formed up.  Major Abasi soon gave the order to advance. 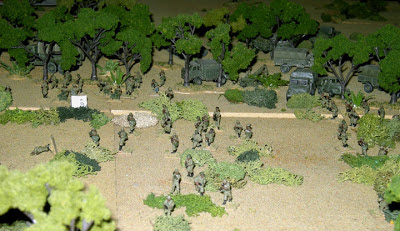 Immediately the Uwandan infantry opened up with rifles and .50 caliber machineguns on the halftracks; men began to fall.  In the process, the Mugabians were dealt a quick and devastating blow; the company headquarters was almost completely destroyed by cannon and machingun fire from the nearest Saladin, resulting in the loss of their ability to communicate with artillery and air support.

Despite heavy loses, Major Abasi continued the advance with support from the anti-aircraft guns, and soon it was Uwanda that was taking loses.  RPGs got hits on halftracks and two of the Saladins, and Uwandan troops began to fall back.  The Uwandan commander watched this from the roof of his command post.  He called for air support, and was dismayed to find that it was many minutes away. 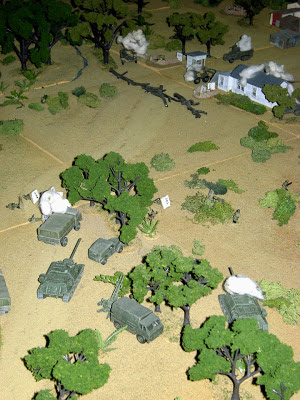 Destruction of the Uwandan roadblock.

At about this time, the Mugabian SU-100s arrived on the scene, blowing up men, vehicles, and buildings as they came into view.   The Uwandan forces moved down the east road to counter the Mugabian advance, but the Mugabians were already moving along the north flank and onto the high ground north of town. The Uwandans managed to stop one of the SU-100s, but not the advance. 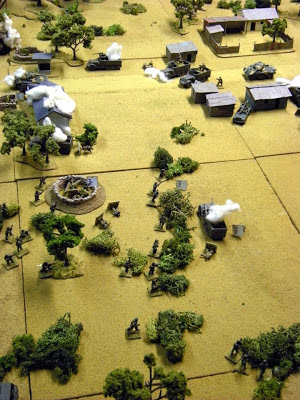 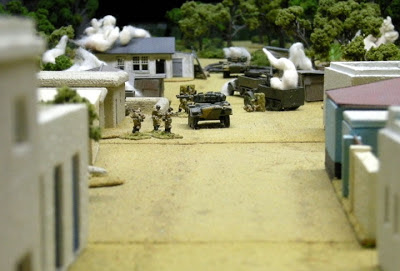 The Uwandan commander watches his forces moving to counter
the Mugabians to the North (out of the view to the left). 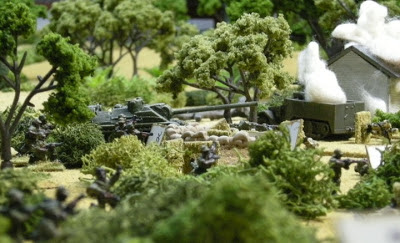 A dangerous game of cat and mouse begins, as the Saladin moves through the burning roadblock
on the east road, while the surviving SU-100 advances into the town.

The advance continues with the Uwandan line starting to break. 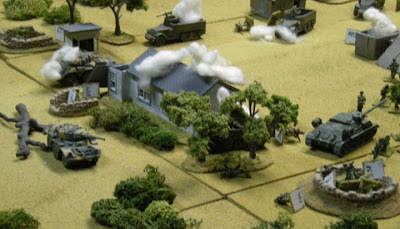 Cat and mouse continues with the Saladin stalking its prey. 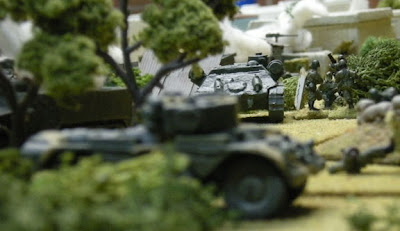 Caught in a flurry of RPG file, the Saladin fails to hit the broad side of a barn,
or the backside of a SU-100.

As the battle developed, Mugabian forces continued to push down the north flank, while slowly, Uwanda's troops were forced to withdraw.  The Uwandan air support simply had not shown up in time, the last Saladin was destroyed by RPGs, and the Uwandan commander was considering conceding to the Mugabians and withdrawing. 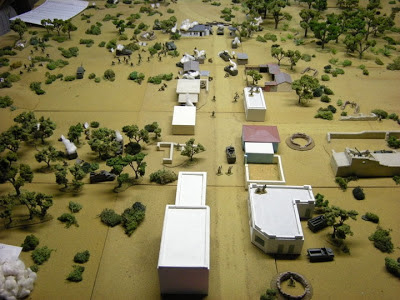 Mugabian forces on the north high ground (at extreme left), and advancing into town,
while Uwandan troops retreat hoping to re-establish a line of defense.

As the Mugabians began clearing the village house by house, the screaming sound of a Strikemaster's engine could be heard.  The jet passed overhead, then looped around as streams of tracers followed.  Mugabian troops ran for cover as death began to fall upon them. 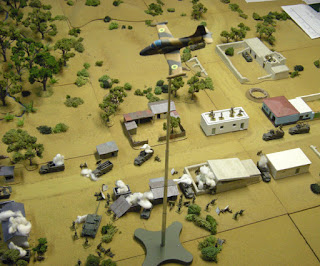 A couple of passes later, Mugabian troops were in retreat, as they simply didn't have the numbers needed to continue the assault.  And as quickly as fate smiled upon Uwanda, it frowned upon her as well.  The last stream of Mugabian tracers found their mark.  The Strikemaster's shattered  fan passed through its engine and the plane landed in a ball of flames to the east.

Major Abasi and his men withdrew.  He wondered again what fate awaited him.  He had rallied his outnumbered troops time and again, without support, only to have victory ripped away despite already being in his grasp.  His men had fought well and had been well lead, but they would return without the town that they were sent to collect.  As the major reflected, he felt a cold breeze in this warm land.

The battle was brutal with heavy loses on both sides, and strangely anticlimactic.  Mugabia out-fought Uwanda and clearly had control until the Strikemaster began to chew them up.  By the time it was shot down, many Uwandan troops had been rallied, and the Mugabians simply couldn't hold the town with what was left.

Mugabia lost the battle and their objective, and Uwanda lost more than it could afford.  Mugabian casualties included 51 men, two SU-100s, and three trucks.  Uwanda had 48 casualties, three Saladins, six halftracks, and the first aircraft of the war, a strikemester light attack jet.

Posted by irishserb at 6:19 PM