I know that there are a lot of nice 15mm T34/85 models already out there, but since I need a bunch of these for various armies of the Cold-War era and for my fictional African campaign, I decided to make my own.

Over the years, I have read about various differences between wartime and postwar production vehicles, making mental notes about some of the differences.  I ended up referring to information from private owners of T34/85 postwar tanks and found that much of what I had read was not exactly true.  In the end, my T34/85 only has a couple of obvious features that might distinguish it as a postwar vehicle, but regardless, I'm pretty happy with how it is shaping up and thought I'd post a couple of pics. 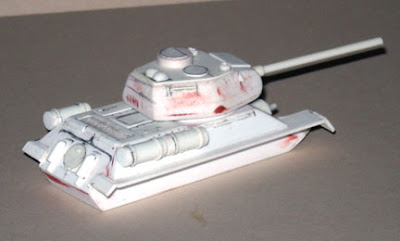 The only obvious postwar details visible (almost) in the top photo is the sharp edge to the hull front and the arrangement of the headlights.
There is still a fair amount of detailing to do, and the tracks don't look like much yet, but if I can get a couple more hours free, I should have it done.  I'm not sure that there will be enough interest to offer this one for sale, but I'll probably need about 60-70 of them for all of the stuff that I want to do.
﻿
Posted by irishserb at 8:15 PM